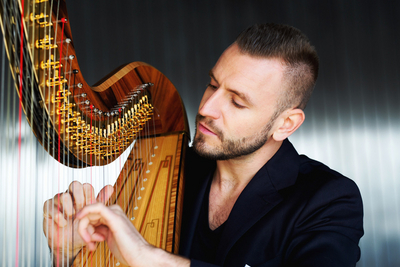 Joel von Lerber was born in Basel in 1991. At the age of six, he had his first harp lessons at the Conservatoire in Bern with Nathalie Châtelain and Simon Bilger. After his bachelor studies with Sarah O’Brien, he completed his Master of Arts in Performance at the Zürich Hochschule der Künste in 2014, also with Sarah O'Brien, and in 2016 his Master of Music with Professor Maria Graf at the Hochschule für Musik Hanns Eisler in Berlin. His examination concert in 2019, which he passed with distinction, was also his debut with the Konzerthausorchester Berlin.

Joel was also inspired by masterclasses with Helga Storck, Isabelle Moretti, Jana Boušková, Xavier de Maistre and with the pianist Pavlin Nechev. During his studies, Joel received several grants, from the DAAD and from Migros-Kulturprozent, among others.

Joel von Lerber performs regularly as a soloist in Switzerland and Germany, appearing with such orchestras as the Bern Chamber Orchestra, the Rundfunk-Sinfonieorchester Berlin, the Konzerthausorchester Berlin and the Filmorchester Babelsberg.